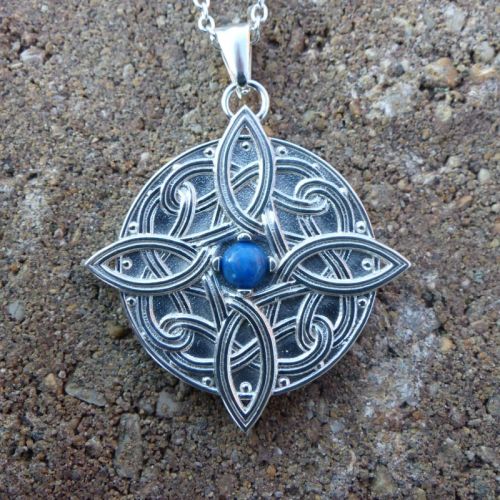 I got a request from a customer to create a pendant that they were unable to find anywhere else. They had a photo of a similar four-point Celtic knot pendant, but it was not in silver. They found me through Shapeways’ Designers For Hire project. They chose me because they had seen that I had created similar pendants already.

This was a challenging piece for a couple reasons. First, they wanted a gem in the center. I have not worked much with gems, although it is something I want to practice and learn. Second, they wanted the piece to be only slightly bigger in diameter than a quarter. Cramming the details into that small of a space would be a challenge. Third, it had a series of four infinity knots that had to be at a lower depth than the four main points that were out front.

After studying the picture I created an initial version of the design with Blender. I knew the first version was not perfect, but I uploaded it to Shapeways anyway. This allowed me to use their model checking tools to see what areas might have problems. I found that some of the details were were being treated as “walls” which were too thin to be made with 3D printing. To address those issues I put a “backing” on the thin wires that come out of the outside of the circle. This basically made it so they would be treated as details coming off of a wall. “Details” have a different set of design guidelines than “walls”. Making the piece larger also helped, so that I could make everything a bit thicker and easier to 3D print.

The customer had picked out a 5mm diameter cabochon to put in the center, and the initial version did not have quite enough space in the center for it. So that was another reason to make the pendant a bit larger. With those things in mind I created a second version of the pendant. This time it passed Shapeways’ model checks. I then shared pictures with the customer to make sure they liked the design. Once they gave their approval, I ordered the piece in silver. I already had the cabochon on hand, so when the pendant arrived I was able to put everything together.

Overall I’m happy with how it turned out. I had done a design or two before with a four-point Celtic knot, but what makes this piece really eye-catching are the four infinity knots that are in the background. Those really add another level of complexity to the design.

After doing this, I’m interested in doing more designs with gems and especially cabochons now. The cabohon was easy to work with since it has a flat back. They are much easier to mount than a princess cut gem would be, for example.

One minor problem is that the prongs for the cabochon got polished down so they were shorter than I had hoped. I had planned to use glue to mount the gem anyway, in addition to the prongs. So, the prongs are not doing much to hold the cabochon, but they did locate it nicely in the center of the pendant.

Meaning Of A Four-Point Celtic Knot

I’m not sure if this symbol has any special meaning to the customer, but a four-point Celtic knot can symbolize a few different things. It could symbolize:

I recently got a shipment from Shapeways with 3 of my newer designs. I did these recently for customers who wanted a custom design. Now these are available for anyone to order. I have 1 of each of these available in nickel-plated steel. If anyone wants one made in a different material let me know. Shapeways has a large variety of materials available, such as sterling silver, polished brass, gold-plated, bronze, brass and more.

UPDATE ON 3/17: The winner of the Celtic Shamrock Necklace is Margaret Rumpilla of Myerstown, PA. Thanks to everyone who participated!

Enter your email address for a chance to win a Celtic Shamrock Necklace. Must be a resident of the USA or Canada to win.
This contest expired.
Powered by ContestHopper
Categories: All, Special Offers
Tags: Celtic Knot, Contest, Jewelry, Shamrock

I got a new shipment from Shapeways with a few new pieces. I’ll be sharing them over the next few days. The first is the leaf pattern Celtic knot rings. This one is a size 6.5 and is made from Shapeways’ raw brass material.

I’ve only gotten a handful of items in this material from them but it is becoming one of my favorites. It has a very high level of detail! It is also one of Shapeways’ most inexpensive materials, at least for their premium metals. It depends on the item, but sometimes the raw bronze and raw brass can be similar in price to their stainless steel material. This is ususally the case for smaller items (like rings!). The bronze and brass metals are much higher quality than their stainless steel, in my opinion.

The inspiration for this particular ring was that I really wanted to do something with a Spring and nature theme. I kind of wanted to build on the Tree of Life theme I started. I also have another leaf design I’ll be sharing soon. Click here to purchase this ring in the shop.