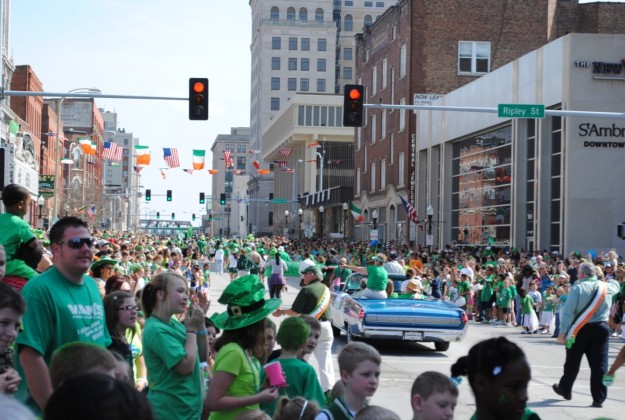 It is getting close to Saint Patrick’s Day again. Now when this day gets close I think back to 2012 and the first time I attended a St. Patrick’s Day parade as an adult. I don’t know what took me so long! But at the same time I don’t know if it would have had the same meaning to me at a younger age.

I say this because it was also around that time that I was finally starting to gain a real appreciation for my family history though the genealogy work my Dad had done in the years efore and since then. He has done a great job tracing back our roots to Ireland, and their journey to and across the USA. You can read some about that here: The Michael Foley Family Blog.

By 2012 my son, Owen, had turned 7. I had learned from my Dad’s genealogy work that I had a relative named Owen Finnegan. He came over from Ireland with his two brothers as teenagers and settled in St. Louis. When we named our son Owen, we did not know about this family history, so it was a very pleasant surprise. It made me want to learn more. In general, having kids and watching them grow has also increased my appreciation for my heritage. It made me realize just how big of a role our genes play in our lives. Kids have mannerisms and preferences and things that neither my wife nor I have.  It’s not like they learned these things by watching us. So, where did they come from, then? Hmmm…

So with all of that going on in my life, going to that parade in 2012 made a big impact on me. The only real requirement for a family to march in the parade is that they be Irish. How often do we simply celebrate our family and heritage like that? Not often enough, I say. I liked how some of the elder Irish were honored in the parade, too, another thing we seem to be lacking too often today. So, if you get a chance, I highly recommend going to the Quad Cities St. Patrick’s Day Parade. It is the only St. Patrick’s Day parade in the USA that goes through 2 states. It starts in Rock Island, IL and goes over the Centennial Bridge to Davenport, IA. This site lists it as one of the top 10 in the country, listed among parades in much bigger places like New York, Chicago, Boston, and San Francisco!

It was just a few months after attending that parade that I discovered Shapeways. When I first I discovered it, I saw some of the other amazing artwork people were doing and it inspired me to try it. I started out doing a number of different things. One of my earliest designs was actually a vase. It did not take me long though to see some of the knots and patterns others were doing, and it inspired me to try making some Celtic knots. I’ve been working on them pretty much since then.