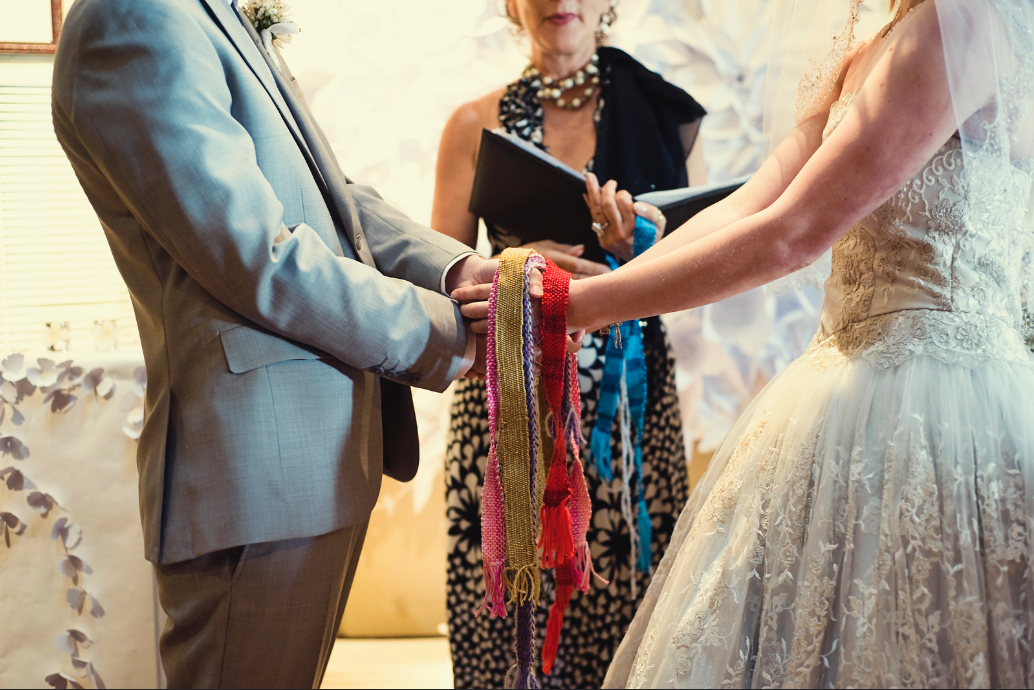 Handfasting is a commitment to marry at a future date. This article talks about the defintion of the word and the history of the custom. It also discusses the ceremony itself, and why it may be popular today.

Obviously, the word “handfasting” comes from the combination of the words “hand” and “fasting”. The old English definition of the word “fæst” is “firmly fixed, steadfast, secure, enclosed.” Today we would probably use the word “fasten” in this context. If you put these two definitions together, it means “firmly securing of hands”.

In addition, it may connect to the Old Norse word handfesta. That word means “to strike a bargain by joining hands.”

This Celtic tradition may date as far back as 7000 B.C. However, some debate whether the tradition goes back that far. Much more is known about how people used it in the Middle Ages. This is the time from roughly 500 to 1700 A. D.

According to this article, experts believe that handfasting faded from use in Scotland in the late 17th century. The book The Monestary (1820) by Sir Walter Scott discusses handfasting in the past tense. This indicates people did not practice the custom during his time. Later, at some point in the late 18th century, people revived the idea of handfasting. The belief arose that it was a period that would last one year and one day. However, that belief was probably incorrect. During this time it was a more secular ceremony and less binding than in prior times.

Finally, from about the 1960s to today, people revived handfasting again. Today handfasting describes Neopagan ceremonies. Like before, people use them to form temporary unions or permanent marriages.

Today, typically a Priest or Priestess will perform the ceremony. Ceremonies are typically done outdoors. It can be an official marriage if accompanied with a state marriage certification. The ceremony can vary and there are no set vows. Often, the couple will write their own vows. However, there are some traditions common to most ceremonies.

This page has a detailed description of customs that handfasting ceremonies commonly use. During the ceremony, the couple joins hands. Sometimes, they cross hands so their body and arms form an infinity symbol from above. Then the Priest or Priestess places ribbons around the couple’s joined hands. Optionally, cords or ropes can be used. The colors of the ribbons represent different aspects of their relationship. Here are some possible meanings of the colors:

You’ll find color meanings similar to these on this page and this page. As far as I can tell, the definitions listed above are common, but there is no consensus.

Why Is It Popular Today?

The internet has increased interest in genealogy. So there is more interest in old traditions. There is a trend toward reviving old customs like this.

Since around 1970, a couple popular books and film may have helped revive handfasting again.  In 1970, The Doors’ lead singer Jim Morrison married Patricia Kenneally in a handfasting ceremony. Morrison’s biography No One Here Gets Out Alive (1980) mentions it. It also appears in the 1991 film The Doors. In the film, Patricia Kennealy-Morrison plays the role of the priestess.

Finally, in the 1995 movie Braveheart, William Wallace and his girlfriend Murron marry in a handfasting ceremony (pictured below).